Historic Rallye - The most essential item of equipment is a sense of humour!

Top British rally driver, Mark Fischer, today found himself at the centre of a storm of controversy after confessing that he had absolutely no idea what his long-term co-driver, Gethyn Davis, was talking about during races.

It had been assumed that co-drivers were reading ‘pace notes’, a series of instructions describing how to negotiate the road layout ahead, but Fischer claims the notes are ‘total nonsense’ and that he has simply been humouring his co-driver all these years. ‘It’s just gibberish,’ he said. ‘But the regulations say that there must be two people in the car at all times during the race, and Gethyn was a good mate so I always just took him along for the ride.’

Davis is reported to be furious at Fischer’s statement and maintains that they were equal partners in the team, but Fisher has been quick to dismiss this.

This is not the first time Fischer has courted controversy over the role of co-drivers. In 2009, after finding himself without a co-driver for the Jyvaskyla Rally in Finland, he kidnapped a homeless man and forcibly strapped him into the passenger seat to ensure that the two-people-in-each-car rule was complied with. The stunt only came to light when onboard footage taken during the race revealed that rather than reading the ‘pace notes’, the Finnish co-driver was in fact screaming the words ‘Oh shit!’ over and over again, occasionally interspersed with other phrases including, ‘Watch out for that house’ and ‘Slow down, you mad bastard’.
Postado por Luis Cesar às 21:29 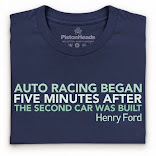 An antique auto is like another man's wife - look and admire, but... DO NOT TOUCH!!!

Who likes little engine is dentist...

Never drive faster than your guardian angel can fly 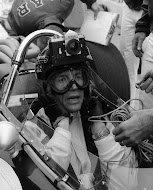 Where is the damned co-driver?